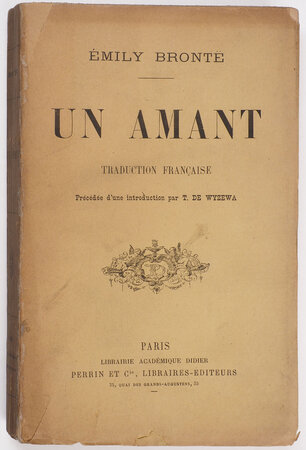 First edition in French of Wuthering Heights (1847) which also includes the first significant critical study of Brontë in French as its preface by the translator. Wyzewa was the first writer to formally introduce Emily Brontë into France — the only prior attempt, thirty-four years earlier, had been a brief allusion to her as the sister of Charlotte Brontë in an article by Emile Montégut for the Revue des deux mondes. Wyzewa gives both an account of the critical reception of Wuthering Heights in England and a biographical sketch. The title Wuthering Heights was not attached to the novel in French before the succeeding edition of 1925, entitled Les Hauts de Hurlevent.

Téodor de Wyzewa, born Teodor Wyżewski in Poland (1862–1917) emigrated to France in 1869. A critic of both literature and music, he was one of the pioneers of symbolism and made his name with brilliant analyses of poems by Mallarmé. Exceptionally rare. Worldcat lists the British Library copy as the only copy outside France. No US copies located. Bénédicte Coste, ‘Un amant: la première traduction française de Wuthering Heights par Téodor de Wyzewa’, Études anglaises 2002/1 (55), pp. 3 à 13.