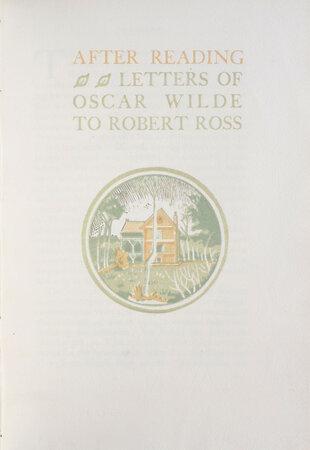 First editions, limited issues, numbers 127 and 231 of 200 and 400 copies respectively (a further 75 copies of each edition were issued on Japanese vellum and signed by publisher and artists). Separately issued companion volumes, collecting Wilde’s letters to Ross, his sometime-lover, constant companion and literary executor, written from France in the aftermath of his release from Reading Gaol. Ross faithfully guarded Wilde’s personal and literary legacy after his death, pursuing pirated editions and preserving his literary rights for Wilde’s sons. It was he who commissioned Epstein’s sculpture for the tomb at Père Lachaise and his will stipulated that his own ashes should be placed there with Oscar’s.

Ross had prepared a volume of Wilde’s post-prison letters to him before the first war and had drafted an introduction shortly before his own sudden death in 1918. These two small volumes are selections, but represent the earliest attempt at a collection of Wilde letters. They are expurgated by removing the names of Lord Alfred Douglas, Constance Wilde and a few others, but the meanings are always obvious.