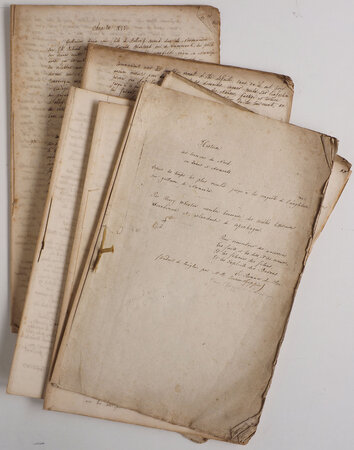 Manuscript on paper, small folio (315 × 200 mm), pp. [4], 216, in 7 sewn gatherings. In French with numerous quotations in English. Some erasures/deletions/corrections, including a couple of pasted overslips. Slightly dusty and frayed at corners, but sound and legible throughout.

The translator Emma Chuppin de Germigny was the daughter of a noble emigré settled in Normandy after the Revolution. A long biographical entry in the Mémoires of the Caen Académie recounts her life: her family’s reduced circumstances necessitated her work as a schoolmistress in Caen, during which time she produced a series of scholarly works (including the Wheaton translation). She published a history of music in Normandy from the ninth century to her own day (1836) and an account of the Bayeux Tapestry (1846). Her translation of Wheaton’s work was not published, though the form of this manuscript, and Emma’s circumstances, strongly suggests it was intended to be. It is almost certainly in her autograph, with occasional corrections. In the event, a French edition by Paul Guillot, with numerous additional apparatus, appeared at Paris in 1844.

Wheaton, a native of Providence, Rhode Island and an alumnus of Brown University was prominent as a lawyer, diplomat and antiquarian. His research into Scandinavian history began with his appointment to Denmark as chargé d’affaires in 1827.