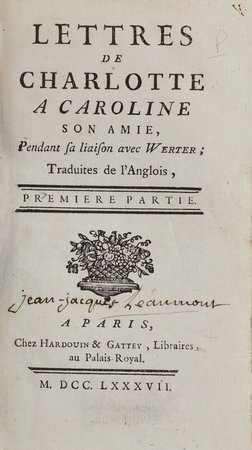 One of several early French editions of James’ Letters of Charlotte (1786) a novel giving Werther’s Charlotte a voice of her own. The first French edition appeared the previous year, and another (besides ours) appeared also in 1787. All are rare: Rochedieu lists neither the 1786 French edition or ours. cf. Rochedieu, 168 (1787, ‘Londres’ Paris: Royez, 18mo).