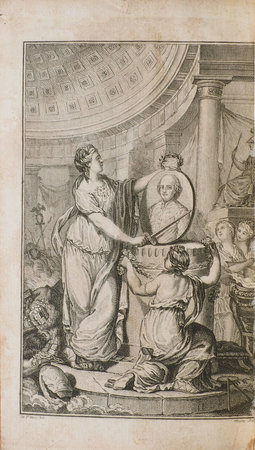 First edition of Le Tourneur’s monumental translation, instrumental in securing Shakespeare’s reputation in France. Preceded only by La Place’s pioneering but partial translations (1745-49) and by some individual translations by Voltaire and Ducis, Le Tourneur’s is the first attempt at the complete works. Inspired by the 1769 Shakespeare Jubilee, Le Tourneur prefaces the collection with a long account of the Stratford celebrations presided over by David Garrick (taken without acknowledgement from Benjamin Victor’s History of the Theatres of London, 1771) and with a biography drawn mainly from Rowe. There is also an important critical essay using materials from Rowe, Pope, Theobald, Hanmer, Johnson and Sewell. The extensive subscribers’ lists (a second lists new subscribers since the start of publication) contains prominent names in both France and England.

The story of Shakespeare’s slow acceptance in France, in the face of prevailing classicism, is well known — Le Tourneur’s translations were the first to allow French readers to make their own judgements and they perfectly reflect the transition from classicism to romanticism in French culture. Indeed, the preface is considered to contain the very first printed appearance of the word ‘romantique’ in the French language, with Le Tourneur referring to the suitably romantic prospect of a clouded landscape and then stressing the need for both the word and the concept in French.

The edition provoked the ire of the ageing Voltaire (always ambivalent to Shakespeare) who on receiving the first volume wrote in a letter to friend: ‘I must tell you how upset I am for the honour of the theatre, against a certain Tourneur, who is said to be Secretary of [La Librairie], but who does not seem to me the Secretary of Good taste. Have you read two volumes by this miserable fellow, in which he wants to make us all treat Shakespeare as the only model of true tragedy?... What is frightful is that this monster had a following in France; and the height of calamity and horror is that it was I who was once the first to speak of this Shakespeare, it was I who was the first to show the French some pearls that I discovered in his enormous dung-heap’ (translated by Davidson, Voltaire: a Life, 2010, p. 439).