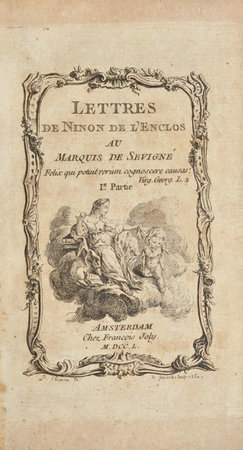 First edition of a bestselling epistolary novel. It purports to be a collection of letters by the famous courtesan, Anne ‘Ninon’ de Lenclos (1620-1705, friend of Boileau, La Fontaine, Racine and Molière) to Madame de Sevigné. Voltaire (and others) wrongly assumed the author to be Crébillon fils. It was frequently reprinted and translated into several European languages (including the English translation by Elizabeth Griffith, who assumed them to be genuine). Cioranescu 22167; Gay II, 828.