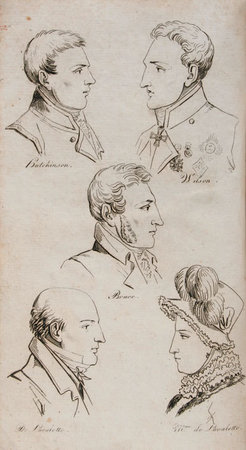 First edition of this contemporary report of the sensational arrest, interrogation and trial of ‘trois Anglais’ (actually an Englishman, an Irishman and a Scotsman) accused of abetting the escape of the Comte de Lavalette on the eve of his execution by the restored Bourbon regime. Lavalette had been one of Napoleon’s inner circle, but had refused exile on the restoration of the monarchy and was sentenced to death. ‘On 10 January 1816 Wilson was instrumental, in conjunction with Michael Bruce and Captain John Hely-Hutchinson (later third earl of Donoughmore), in the escape from Paris of Count Lavallette, who, condemned to death, had escaped from prison by putting on his wife’s clothes. Wilson passed the barriers in a cabriolet with Lavallette disguised as a British officer and conveyed him safely to Mons. He sent a narrative of the adventure to Earl Grey (reprinted in the Gentlemans Magazine in 1816), which was intercepted. He was arrested in Paris on 13 January. The three Englishmen were tried in Paris on 2 April and sentenced on the 24th to three months’ imprisonment’ (R. H. Vetch in Oxford DNB).