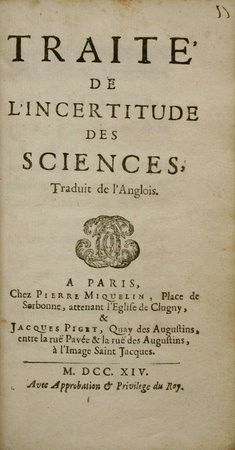 First edition in French of Baker’s popular Reflections upon Learning (1699), a work designed to display the inadequacies of human knowledge and reason and to emphasise the ultimate need for belief in revelation. It proved controversial (provoking an angry response from geologist and physician John Woodward) and was widely reprinted in England. Bacon and Descartes, the twin pillars of scientific civilisation, raised on either side of the English Channel, are closely considered, though the spirit of scientific enquiry is frequently disparaged. The work of a conservative Anglican antiquary, its reception in France is perhaps surprising. The French translation was reprinted at Amsterdam the following year. Rochedieu, p. 15.