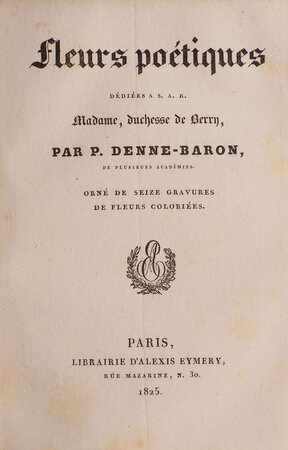 FIRST EDITION of this delightful collection of floral poetry illustrated with unusual colour printed plates, each of two or three tints probably applied to the plate simultaneously. They are described by the online catalogue of the Bibliothèque nationale as lithographs, but they appear to be a kind of stipple engraving. A couple are marked as being after drawings by Poitreau, one of the most prominent botanical artists of the era (alongside Redouté). The work is dedicated to the young salon host, collector and bibliophile, the duchesse de Berry (1798-1870). An Italian princess, she had married the duc de Berry in 1816, bearing him four children before his assassination in 1820. Her children were direct descendants of Louis XIV and thus her family were important during the Bourbon restoration as representatives of the Legitimist claim to the throne of France. She was exiled after the 1830 July Revolution and lived successively at Bath and Edinburgh before returning to Italy, where she intrigued for an unsuccessful Legitimist rebellion and a return to France.