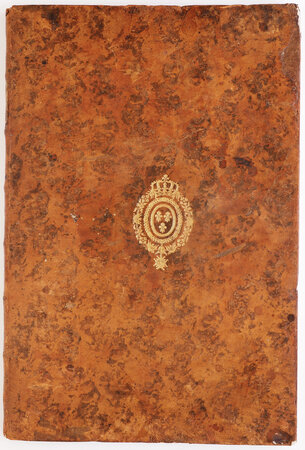 First edition of this graphic companion to the life of the great French corsair captain Du Guay-Trouin, and specifically to the Memoires (Amsterdam, 1740), for the use of young mariners who are urged to examine and draw copies of the detailed engravings. The work includes a précis of his exploits (the text also engraved) a glossary of marine terms.

Besides the two maps, the engraving is the work of the remarkable Ozanne family: Nicolas (or Nicolas-Marie) and his sister, Jeanne Françoise, whose names appear as artist and engraver respectively at the foot of the title plate. Hailing from Brest, the young Nicolas (1728-1811) had begun a career as a naval artist when his father died, leaving him responsible for three siblings (a brother and two sisters) all of whom he enlisted as contributors to his business. He rose to some prominence and was named as a royal ‘dessinateur de la marine’ in 1757, still assisted by his siblings. His sister, Jeanne François (1735-95) seems to have been the most active of these, and she is named as engraver in several other collections and single plates besides this one, usually marine prints.

Duguay-Trouin is remembered as one of the greatest French naval commanders. In 1704-1705 he commanded the ship Jason and captured the British ships of the line HMS Elizabeth and HMS Coventry; then on 21 October 1707, together with Claude de Forbin, he achieved his greatest victory against a British squadron, in the Battle at the Lizard (part of the War of the Spanish Succession); in 1709 he captured the British ship of the line HMS Bristol, while the triumph of his career came on 21 September 1711, in an 11-day battle, where he captured Rio de Janeiro, then believed impregnable. The two double-page maps (both signed ‘Drouet’) depict his battles around the French and British Coasts and his capture of Rio. Une famille d’artistes brestois au XVIIIe siècle: les Ozanne, Charles Auffret (Rennes, 1891). Borba de Moraes, p. 273; Bosch 244; Polak 7235; Rodrigues 908; not in Sabin.