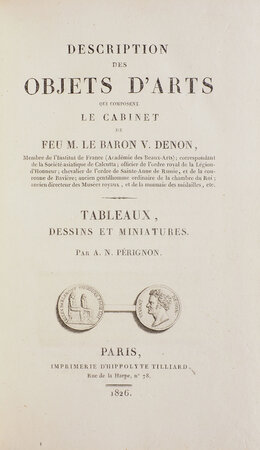 First editions of the complete sale catalogues of Denon’s celebrated collections, a marked-up set from the collection of Frédéric Villot (1809-1875), Louvre conservateur of pictures and an important collector in his own right.
Besides his erotic novella, Point de Lendemain, Denon (diplomat, artist and director of the Musée Napoleon at the Louvre) is primarily remembered for his role in Napoleon’s expeditions of 1798-9 and as author of Voyage dans la Basse et la Haute Égypte (1802). Among the most influential and important French collectors, he acquired obsessively but with discrimination, both for Napoleon and himself. His posthumous sales of 1826-7 included over 3000 lots of antiquities, pictures and prints, with eight important Egyptian papyri included in the first sale and his own drawings from the Egypt exhibition in another. The three volumes are very scarce complete and comprise: I. Monuments antiques, historiques, modernes; ouvrages orientale, etc. (ed. L.J.J. Dubois, 1390 lots); II. Tableaux dessins et miniatures (ed. A.N. Perignon, 977 lots); III. Estampes et ouvrages a figures (ed. Duchesne Aîné, 801 lots).