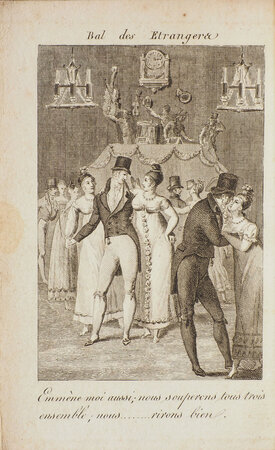 First edition, rare, of this collection of racy tales from the Palais Royal, the fabled European capital of libertinism. Framed as a series of initiatory narratives on the perils of loose women and gambling, Les Soirées actually contains several anecdotes of sociological interest. One involves a bragging libertine husband, who claims his wife would never cuckold him, only for the narrator to seduce her and to contrive a fitting punishment for his boasts. He arranges adjoining private rooms in a favourite Palais Royale restaurant, sending the husband to one with a complicit mistress, while he himself takes the libertine’s wife to another. As the couples make love, an opening between the two rooms allows them to see just enough of their neighbours to further inflame their desire. Only on leaving the chamber does the husband realise that it was his wife he has seen in flagrante in the other room, and with his friend. After an understandable outburst, a philosophical discussion ensues on the equivalence of female and male desire and morality (see Counter, The Amorous Restoration: Love, Sex, and Politics in Early Nineteenth-Century France, 2016, p. 137).

The two plates were evidently printed on the same sheet, appearing as a folding frontispiece in some copies.

Anonymous, it is attributed to Cuisin, who specialised in Palais Royale titillation and produced many similar works. The printer, the widow Jeunehomme is an interesting figure, one of a handful of female printers in Paris at this point and a Bonapartist who was later imprisoned for political reasons (Dictionnaire des femmes libraires en France, 1470-1870). Worldcat locates copies at Bn (without half-title), BL (with half-title) and Johns Hopkins (also 1815, but ‘Second edition’, perhaps an error, confounding this work with an earlier work with a similar title)