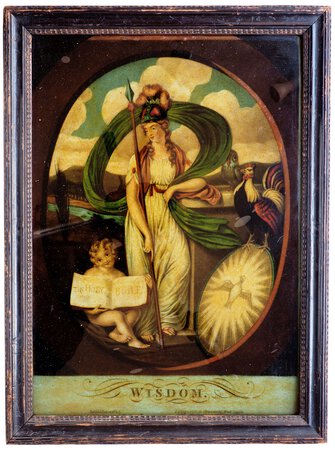 Wisdom as a woman. The print is a good example of the relatively short-lived fashion for the ‘back painted’ or reverse glass coloured mezzotint. The print is moistened and laid face down on a varnished sheet of glass and allowed to dry; once the paper is firmly fused with the varnish and glass, most of it is scraped away from the verso leaving a minutely thin layer of printed paper within the varnish. This is then varnished again on the verso to give a rich and distinctive translucency. Colours, usually in oil, are then added, again to verso. Over time the varnishes invariably darken, resulting in the rather subdued but still translucent hues found here.

‘Wisdom’ was probably part of a sequence of the Virtues published by Hinton, shortly after 1800. The British museum catalogue lists this print and another representing ‘Innocence’ (but neither are reverse glass treated).