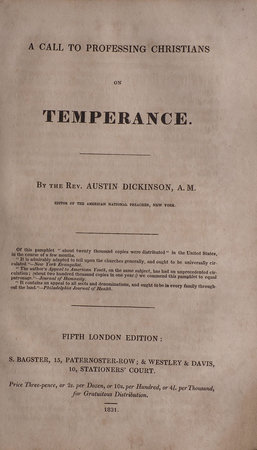 A very scarce early temperance movement sermon. ‘The use of liquor is inconsistent with any thing like pure and high spiritual enjoyment, clear spiritual views, and true devotion...’. Published in New York in the National Preacher in 1831 and rapidly reprinted within just a few months in several editions in London, where the Temperance movement was in its infancy. The British and Foreign Temperance Society issued its first report in 1831 (an extract is reproduced on p. 16 here). Worldcat/LibraryHub locate only a handful of copies of all issues, American and British (the former being extracts from the National Preacher).