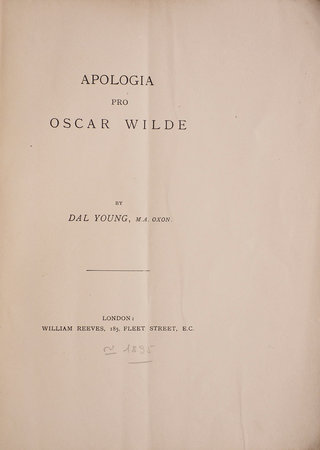 First edition of this defence of Wilde by his loyal friend, composer and pianist, Dalhousie Young. ‘Published after Oscar Wilde's trial, during which Wilde's works were used as evidence of his ‘immorality'’ Apologia pro Oscar Wilde sets out to defend Wilde and his writing. Dalhousie Young argues that a work of fiction is not automatically a work of autobiography; fiction does reveal an author's inner secrets or true character. Powerfully, Young furthermore publicly questions whether it is right that sexual acts between two consenting adults of the same sex should be outlawed (see p. 38), or looked upon as a ‘sin’’ (British Library).

This is the second of two issues of the first edition, distinguished by its darker wrapper. Millard, Bibliography of Oscar Wilde, p. 574, no. 679.