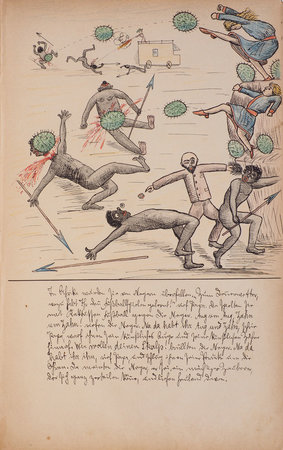 4 manuscript notebooks, folio and 4to, fully completed in manuscript and ink, watercolour and crayon drawings. Original marbled boards, cloth spines. Rather worn, but all sound and complete.

A collection of children’s stories evidently written by a father (perhaps Herr Schmutzer, whose stamp appears in each) for two young daughters. Each volume is a separate story telling of the girls’ adventures around the world. The text is in German throughout and every page bears a large illustration. A terrifying insight into one early-twentieth century father’s idea of a family entertainment.

‘...Laurentia und Emerentia Stutzlmeier’. 1902. Folio (330 × 210 mm), ff. [30] (the last blank) of which 28 each bear text and a large drawing. Card wrappers, loose in cloth backed boards. The tale of two young sisters lost in the forest during a family picnic. Rescued from a wolf by a kindly hermit they embark on a series of miraculous adventures with a cartload of magic pears and a menagerie of animals. Reunited with their parents they return to the woods to find the hermit dying; they bury him and he is borne aloft by angels.

‘Die gar wundersame geschichte von den beiden Babys in der Techanei’. 1904. Folio (325 × 210 mm), ff. [56], of which 54 each bear text and a large drawing. Crudely sewn in cloth-backed boards, uniform with the above. The father takes his daughters out on an excursion, but an encounter with a witch separates the girls from him. Kidnapped in the witch’s house, they elude her protective snake, toad and cat and escape in a paper boat. Reunited with their father they embark on a series of terrifying adventures under his protection: he slaughters all assailants with a pistol, sword and bare hands, leaving a trail of bloodshed. A return to a derelict house scattered with the skeletons of pets and family members begins a new chapter, before the trio return home in a magical amphibious horse-drawn cart.

‘Die Geschichte von die beiden Babys und die Reise um die Erde’. 1910. Folio (340 × 205 mm), ff. [42], of which 41 each have text and a large drawing. Cloth backed boards. In this final volume Herr Schmutzer oversteps the mark. Taking his young daughters on a round-the-world trip in a self-propelled car (Gibraltar, Africa, Egypt, Persia, China, Siberia, The North Pole) he indulges in the worst kind of xenophobic violence against most of the inhabitants of the known world, all in the interests of the protection of his daughters.