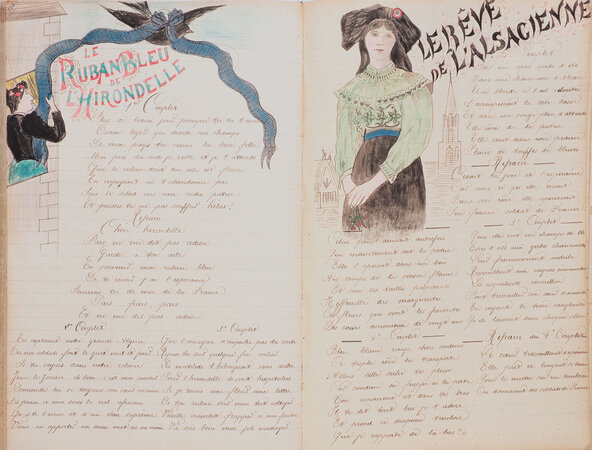 These notebooks are a fascinating example of a popular method of collecting popular French cabaret songs, all neatly copied up with headings and illustrations (usually suitably suggestive) copied from contemporary song sheets (an example of one of these loose sheets is loosely inserted). We have seen several similar examples, in which the illustrations are apparently traced using carbon paper from printed (or other manuscripts) exemplars. Their context is usually military or naval and they represent a significant form of popular or naive art.

The decorative title, with elaborate borders describes Arbez Carme as ‘employé au Magasin des Vivres de Réserve du 23me Reg[im]ent d’Inf[anter]ie a Bourg, Ain’. Military records record his birth in 1876 in Jura, his occupation as a perruquier (wigmaker) and his recruitment in 1896.