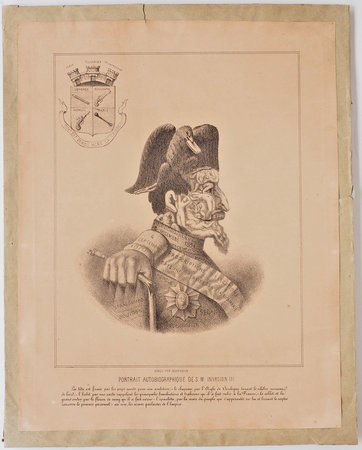 A satirical anthropomorphic lithograph, issued in the aftermath of the Paris siege, unfavourably comparing Napoleon III with his uncle Napoleon, who had been the subject of a similar satire at the beginning of the century. The original Napoleon print had depicted the victims of his successful ambitions in Europe and the territories he had conquered — in contrast, this one shows his nephew, dubbed ‘Invasion III’, formed from the corpses of those who died for his failed ambitions. He wears a cloak made from a map of his principal defeats (Strasbourg, Sedan, Boulogne, Mexico) and a sash bearing the names Cayenne, Lambessa and La Rocamarie (the first two being French penal colonies the last being the site of a miner’s revolt immortalised in Zola’s Germinal). His hat is the Napoleonic eagle with a beak full of lard.