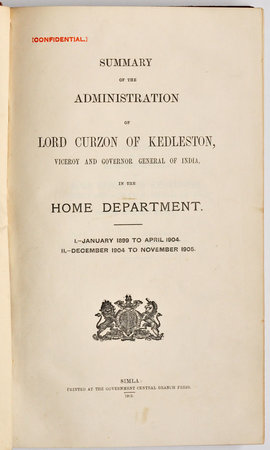 First edition of the official report of Curzon’s administration of Indian home affairs during his period as Viceroy. Curzon’s office was contentious and was concluded following a bitter feud with Kitchener. His belief in traditional sovereignty was frequently at odds with emergent Indian nationalism but many of his achievements have been long lasting, especially in the field of law, education and cultural heritage. Nearly 100 pages of the Home Department report are devoted to his judicial reforms with a further hundred concern policing and penal policies. His work reforming the University system is recounted in detail and there are interesting accounts of the merger between the Calcutta City Library and the Imperial Library to form what became the Indian National Library. Medical, sanitary and plague issues also occupy a full part.

This is one of several official reports on aspects of Curzon’s administration, subtitled: Public Works; Department of Commerce and Industry; Department of Revenue and Agriculture and Railway Board. All are very scarce. COPAC and OCLC between them list copies of the Home Department report at Bodley and Syracuse only.