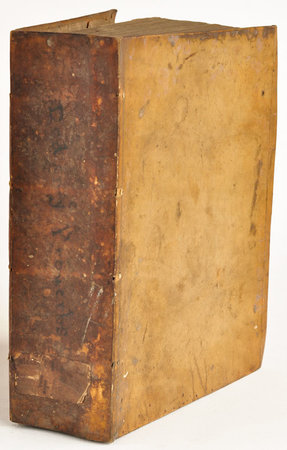 [DOD, John and Robert CLEAVER]. ~ A plaine and familiar exposition of the ninth and tenth chapters of the Prouerbs of Salomon. London: Felix Kyngston, for Thomas Man, 1612.

[bound with:] — A plaine and familiar exposition of the eleuenth and twelfth chapters of the Prouerbs of Salomon. London: William Hall, for Thomas Man, 1612, pp. [viii], 191, [1], complete with first leaf, blank except for signature ‘A’ at foot, third edition, STC 6959;

[and:] — A plaine and familiar exposition of the fifteenth, sixteenth, and seuenteenth chapters of the Prouerbs of Salomon. London: by Felix Kingston for Thomas Man, 1611, pp.[viii], 157, [3], complete with final blank, second edition, STC 6964;

[and:] DOD, John and Ronert CLEAVER. A plaine and familiar exposition: of the eighteenth, nineteenth, and twentieth chapters of the Prouerbs of Salomon... London: [William Stansby and Thomas Creede] for Roger Jackson, 1611, pp.[xii], 170, [2], complete with initial and final blanks; second edition, STC 6966.

Dod and Cleaver’s Plaine and familiar expositions were a Puritan publishing phenomenon. They were written while the two preachers were under a ban imposed by the Bishop of Oxford after they refused to subscribe to Whitgift’s Three Articles and were an inspiration to the generation of Puritans in England and America. Each book was separately issued and they appear bound up in a variety of formations, the present collection being typical. They were later collected as A brief Explanation of the whole book... of Salomon (1615).

The dedication to Sir Anthony Cope of Hanwell (patron of Dod’s former living in Oxfordshire) explains the desire to stir up evangelical zeal. ‘We are now more willing to make some worke for the Presse, because we have no imployment in the pulpit. And who knoweth, but that others... may be stirred up hereby, to publish some of their godly meditations; that as their faithful labours were formerly like pure fountaines, which did not only refresh their particular congregations: so now, by meanes of printing, they may be made like great and comfortable rivers, to water the whole Lands.’