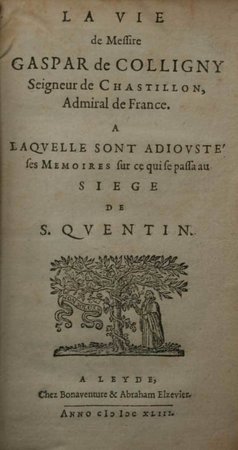 Coligny had been appointed Admiral of France in 1552 and was captured at the siege of St Quentin in 1557. In the two years of his captivity he became a convinced Calvinist and went on to lead the French Huguenots in the religious wars against Catholic dominance in France. He was implicated in the murder of Francis, Duke of Guise in February 1563, an event which was to lead ultimately to the Massacre of St Bartholomew in 1572, in which Coligny himself was killed under the direct supervision of the Duke’s son, Henry.

Coligny’s life became an inspiration to Protestants throughout Europe. It was first printed in Latin in 1575 and had previously appeared in French earlier the same year, in a quarto edtion. Willems 564 ‘ce petit volume, parfaitement exécuté, est un des plus recherché de la collection elzevirienne.’