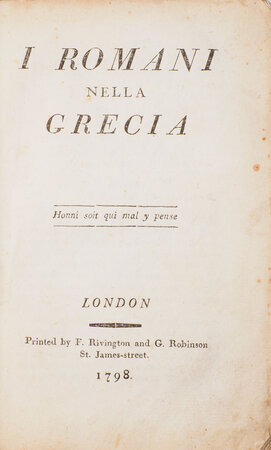 8vo (167 × 105 mm), pp. 58. Four leaves (folding) of manuscript verses in three different hands pasted to a final blank (some worming to the paste on each, not affecting the texts. Uncut, preserved in modern paste blue wrappers to style. Bookplate (Gregorio Fumach).

An anti-Napoleonic tract, describing the French victories in Italy under Napoleon in 1796, under the figure of the Roman conquest of Greece. Having published more than one such critiques, Barzoni had fled Venice in 1797. First published in 1797 under false imprint, there were numerous editions and issues of I Romani nella Grecia with ‘London’ imprints like this, probably all printed in Venice.

Appended to this copy, probably contemporaneously are four popular patriotic songs or verses of a type which would have circulated semi-clandestinely in manuscripts like these. One is entitledL ‘Alfieri all sua Patria’. This edition not in ESTC, which lists a 1797 edition with the F. Rivington and G. Robinson imprint, and several other editions 1797-9.