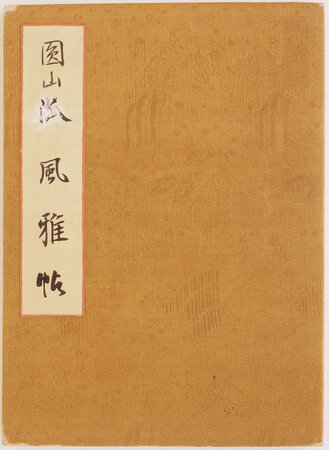 12 paintings on silk (each 110 × 240 mm) each mounted to the gold-flecked paper leaves of a later (probably nineteenth-century) album. Some flaking (see illustrations) particularly to flesh tones but mostly still very well preserved in album form. Gold silk brocade over boards.

Twelve superb paintings on silk (six pairs), each a couple making love, with one image showing faces, the other, their genitals, in each case provocatively and playfully framed to present a detail only. The paintings of each pair are linked by subtle details of clothing, sometimes suggested through a small glimpse of a pattern or a colour found in its counterpart. They are probably cuttings rescued from a refined and elegant hand scroll or hanging scroll of a larger size, wittily preserved in pairs. These are rare survivals of very high status shunga painting of the decades around 1800. The later title label on the album cover attributes them to the so-called ‘Maruyama School’ of Kyoto, but they have more in common with the sophisticated erotic silk paintings of high status artists such as Chôbunsai Eishi working around 1800. Several such paintings, on scrolls, are reproduced in the British Museum exhibition catalogue Shunga: Sex and Pleasure in Japanese Art (2013), see illustrations 56 and 57.