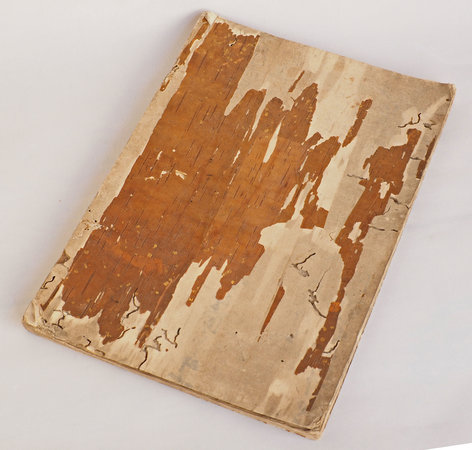 (275 × 188 mm), 24 manuscript and watercolour drawings, arranged in traditional concertina style, within soft pastepaper boards. Covers wormed, with minor worm holes/tracks to first and last images. One leaf with portion of margin cut away and neatly restored.

A delightful example of Japanese art of flower arrangement, ikebana, in the form of 24 ‘Rikka Zu’ (flower arrangements), with an important provenance. The arrangements combine boughs of trees or bamboo. with flowers including chrysanthemums, lotus, lilies, irises, and cherry blossom. The style is deliberately and strikingly asymmetrical, with stems tightly bundled at the foot in keeping with prevailing decorative aesthetics.

The manuscript is dated, on the first extant image, Kansei 4 (1792) July 7th and there is a further inscription to the verso of one fold, now partly obscured by a paper strip (an old reinforcement) but still legible. It reads: ‘The lord Todo Izumino-kami, when his ambassador’s mission at Kyoto had a celebration in Ryokan’ and ‘Ikeno bo’. Ikenobo was the oldest and most important school of ikebana in Japan, founded at Kyoto in the fifteenth century, while the Todo clan were an ancient Samurai family with origins in the sixteenth century. The manuscript may be considerably older than the inscription of 1792. Its style is closely comparable with a manuscript now at Cambridge, Ikenobō rikka no zu (CUL FJ.978.12) dated to the ‘seventeenth or eighteenth century’ (2223 in Hayashi and Kornicki, Early Japanese books in Cambridge University Library).