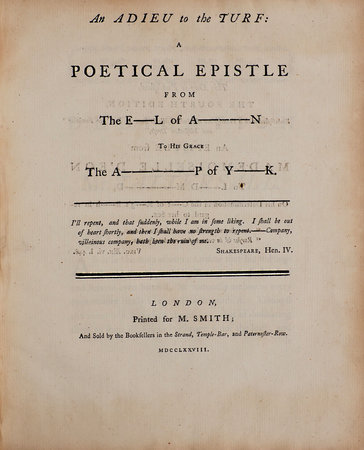 (ABINGDON, Willoughby BERTIE, Earl of). ~ An Adieu to the Turf: a poetical Epistle from The E-L of A----N To His Grace The A----P of Y--K. London: Printed for M. Smith; and sold by the booksellers in the Strand, Temple-Bar, and Paternoster-Row. 1778.]

A verse satire on the eccentric Earl of Abingdon’s former attachment to sporting pleasures (racing, cricket and cards) and his apparent new-found interest in politics, which he expressed in his inflammatory pamphlet of 1777: Thoughts on the letter of Edmund Burke, esq. to the sheriffs of Bristol on the affairs of America. Of An Adieu to the Turf the Monthly Review noted: ‘Some court wit, a knowing one too, has given, in arch numbers, the last words and dying speech of a Newmarket peer. —Very severe on the Earl of Abingdon,— for turning Patriot.’ Abingdon’s colourful youth is the butt of a stream of jokes: from his preference for Hoyle over Horace, to his attempts to apply the rules of cricket to courtship. ‘Scarce fourteen years has pass’d away / When first I thought of am’rous play, / Of Women not afraid: / For them I left more childish Cricket; / I only strove to hit their Wicket,... / And put-out every Maid’ (p. 3). Jackson, p. 60.