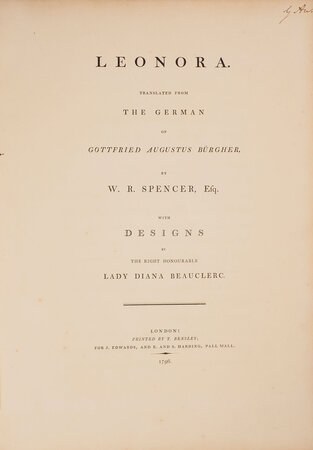 Folio (362 × 255 mm), pp. [8], 35, [1], plus engraved frontispiece and 4 plates by Bartolozzi, Harding and Birrell after Lady Diana Beauclerk, two engraved headpieces, all with original tissue guards, parallel text in German (gothic type) and English, on wove paper. Very lightly browned throughout, a small scatter of wormholes to the blank gutters, mostly inconspicuous. Contemporary half calf. Spine defective and corners worn but all secure. From the library of Christopher Reynolds Stone (1882-1965) with Wiston Old Rectory bookplate. A good copy only.

First edition of this translation and with the striking large engraved plates by Lady Diana Beauclerk. The artist was the eldest daughter of Charles Spencer, third duke of Marlborough. ‘Lady Di, as she was familiarly known, grew up at Langley Park, Buckinghamshire... There she enjoyed a happy upbringing, her taste for drawing developing early under the influence of Sir Joshua Reynolds’ (Oxford DNB). Her second marriage to Topham Beauclerk brought her into the orbit of Edward Gibbon, David Garrick, Charles Fox, Edmund Burke, and others. Her work — often in the gothic taste — was admired by Horace Walpole who commissioned seven large panels in black wash illustrating his tragedy, The Mysterious Mother, which he hung in a special hexagonal closet at Strawberry Hill (six of them are now at the Lewis Walpole Library, Farmington, CT). She also produced designs for Josiah Wedgwood.