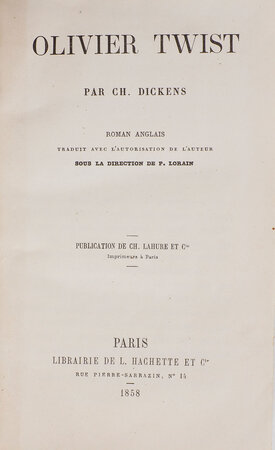 First authorised edition in French, the translation by Alfred Gérardin. It contains a bilingual address by Dickens giving his approbation to the translation as part of a Works series projected by Hachette, concluding: ‘This is the only edition of my writings that has my sanction. I humbly and respectfully, but with full confidence, recommend it to my French readers. Charles Dickens. Tavistock-House, London, January 17th, 1857’. It is the translation in which Oliver Twist was read by French readers into the twentieth century, though the identity of Alfred Gérardin remains obscure.