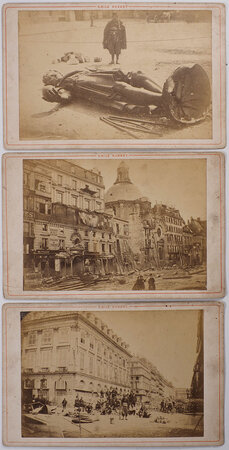 A POWERFUL RECORD OF THE DESTRUCTION IN PARIS during the Paris siege by the Prussians in 1870 and during the brief era of the Paris Commune and its suppression. The sixty-seven prints show a variety of streets, squares and monuments. Some have captions (within the print) giving locations and Disdéri’s name and they include: Rue de Lille, Place Vendôme, the Tuileries, the Louvre, Rue de Rivoli, Place du Chateau d’Eau, Porte Maillot (chemin de fer de Ceinture), Fort d’Issy, batterie de Chatillon and St Cloud. Two photographs depict the Colonne de Juillet (intact) erected in 1830 to commemorate the 1830 revolution, while two others show the ruins of the Colonne Vendôme, torn down by the Communards in 1871. The three loosely-inserted cabinet photographs are by Émile Robert an include two the same column, with the toppled statue of Napoleon and communards posing nearby.

Disdéri, best known for his popularisation of the carte de visite phenomenon in France, was prominent among the many contemporary photographers who captured the era. They were widely sold, disseminated and collected in the aftermath of the violence.