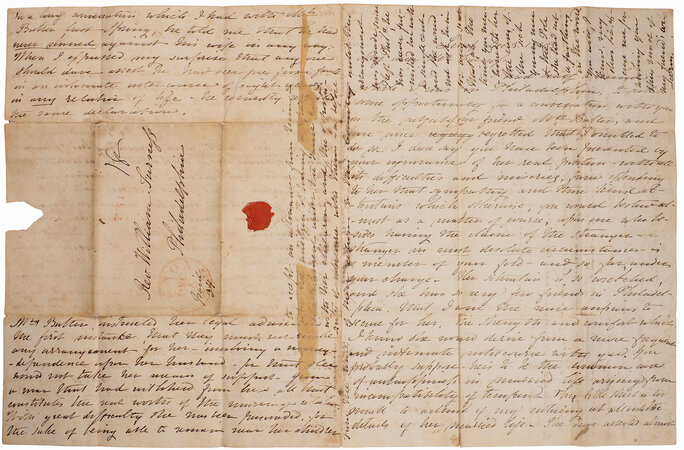 4 pages (250 × 194 mm) on a bifolium, each page fully written and sometimes cross-written (c. 1000 words), integral address panel, postally marked, parts of red wax seal. Formerly folded, and now with some splits along the folds, traces of paper mounting (perhaps to a book or album) to one page, the few words of affected text legible beneath. Fragile but secure.

AN UNPUBLISHED LETTER FROM ELIZABETH BUCKMINSTER DWIGHT SEDGWICK (‘E.B. SEDGWICK’) TO WILLIAM FURNESS OF PHILADELPHIA, IMPLORING HIM TO HELP THE ENGLISH ACTOR AND ABOLITIONIST FANNY KEMBLE (MRS BUTLER), then resident in Philadelphia as her marriage to the notorious philanderer and Georgia slave-owner, Pierce Butler was dissolving. Sedgwick explains Kemble’s parlous situation and the abuse she experienced at Butler’s hands. In just over 1000 words Sedgwick mentions Kemble’s abortive plan to publish her letters on her husband’s plantations, recounts news of Pierce Butler’s serial infidelities, of ‘the brutal manner in which for one year he attempted to crush her spirit’, her attempts at reconciliation for the sake of her children, her desire to not take anything from Butler by way of support and the instigation of the legal proceedings which would eventually lead to the couple’s divorce.

The writer, Elizabeth Sedgwick (1801-1864) of Lenox, was Kemble’s closest confidante, to whom Kemble addressed her famous letters (referred to here) later published as the Journal of a Residence on a Georgia Plantation (1863). The recipient was William Furness (1802-1896), a Transcendentalist (a lifelong friend of Emerson) and a prominent abolitionist. Born in Boston in 1802, Furness graduated from Harvard Divinity School in 1823, before becoming minister of the First Unitarian Church in Philadelphia at the age of 22 in 1825. He was still at Philadelphia when the desperate Fanny Kemble came to the city with her family after a disastrous visit to England in which it became apparent that her marriage to Butler was over. ‘From the time of their return to their country until her arrangement was made since I left Phil[adelphi]a, he had never furnished her with a single cent … she had not a farthing in the world’.

‘In 1838 Fanny with husband and children went to Georgia to spend the winter on their plantations. From apparently knowing nothing of slavery, she was thrown into the thick of the problem. Butler was moderately considerate to his slaves, but nothing could disguise the horrors of a system in which one man lived by owning others, treating them precisely as he fancied in order to get the best investment out of them. Worst of all, Fanny recognized that the considerable wealth the Butlers enjoyed, and to which she owed every mouthful she ate, came from the hated system. As it turned out, she spent less than four months on the plantations, but that was enough to stoke her moral indignation over the atrocities she saw. Once more, as she had done on first going to America, she kept a journal of her experiences, which in 1863 finally saw print as Journal of a Residence on a Georgian Plantation in 1838–1839. It is a small masterpiece of generous outrage, arguing from the amply and sympathetically documented details of what she had seen, to generalized indignation that such treatment could be tacitly encouraged by part of a civilized nation. Although it was deliberately not published in the American south, copies soon found their way there and scarcely increased admiration for the meddling of an outsider who expressed herself on what was regarded as an indigenous issue’ (Oxford DNB).