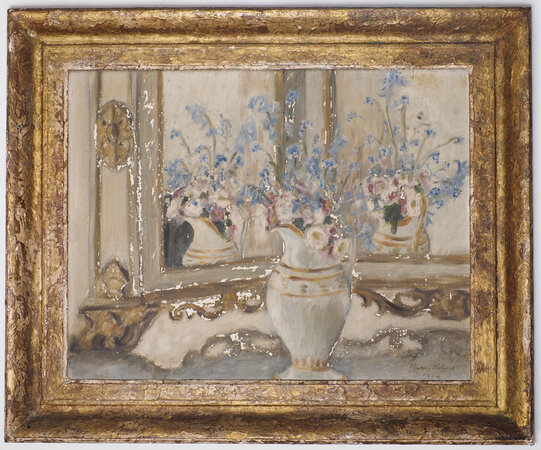 Nancy Mitford briefly attended the Slade School of Art in 1926-7, but stayed only a month. Her work was dismissed by Professor Henry Tonks, and it has become customary to assume that she had no talent for the visual arts. Nonetheless, a small oil attributed to her Slade period was sold at the Duchess of Devonshire sale in 2016 (£15,000) and is the only other painting by her we have located. Our larger picture is signed and dated 1934 and depicts blue summer flowers — rather indistinct, but perhaps bluebells, delphiniums or forget-me-nots (or a combination) with daisies — in a small porcelain vase before an ornate folding mirror in which they are reflected. It dates from a rare period of domestic happiness for Nancy. Having published two novels already, she had married Peter Rodd in December 1933 and they moved into Rose Cottage, a tiny house by the Thames at Strand on the Green, where she enjoyed furnishing it with impeccable taste on a limited budget. She evidently painted and continued to write (she published her third novel, Wigs on the Green, a facetious parody of the British Union of Fascists, in 1935). ‘The marriage was not a success. Peter, handsome and clever, was an irresponsible husband and a bore. A buccaneer by nature and incurably unfaithful, he was unable to hold down a job for more than a few weeks at a time, so that the couple were forced largely to depend on Nancy's allowance and the small income brought in by her writing’ (Selina Hastings in the Oxford DNB).