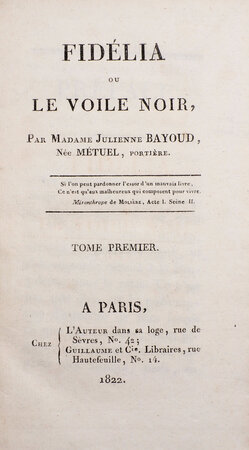 First edition of a very rare gothic romance set in England by an author who described herself as a ‘portière’ (or concierge). Julienne Bayoud is known to have published two novels, the present Fidélia (1822) and Céline (1823). Fidélia was quite well reviewed in Revue encyclopédique, 14 (1822), in which it was noted that given the lowly status of the the author as a portière the novel’s style demanded surprisingly little indulgence on behalf of the reader, and that it contained much that was lacking in contemporary novels of its type. Beyond the address given in the imprint, little is known of the circumstances of Mme. Bayoud. Pigoreau names her as the daughter of a humble hat maker and posts that she must have been self-taught, while complimenting the novel’s pure and elegant style. The five corrections in a contemporary hand found in our copy do not follow a printed errata, and may just be authorial. Pigoreau, Deuxième supplément à la Petite Bibliographie biographico-romancière de Pigoreau (15 February 1822, pp. 31-2). Worldcat lists copies in the Bibliothèque nationale, Frankfurt, Goettingen and Leipzig but none outside continental Europe.