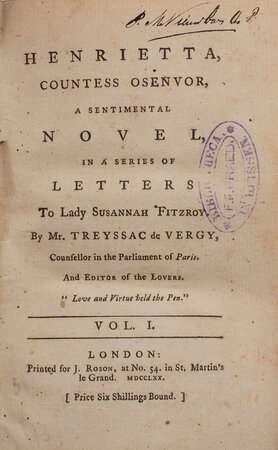 TREYSSAC DE VERGY, [Pierre-Henri]. ~ Henrietta, Countess Osenvor, a sentimental Novel, in a Series of Letters to Lady Susannah Fitzroy. By Mr. Treyssac de Vergy, Counsellor in the Parliament of Paris. And Editor of the Lovers.... London: for J. Roson, 1770.

First edition, rare, of an epistolary novel by a Frenchman in London, who was variously described as a diplomat, an adventurer and a spy. Treyssac de Vergy had come to England at the time when a circle of French diplomats, including the Comte de Guerchy and the Chevalier D’Eon were making themselves notorious by involving the English courts in their interpersonal disagreements. Vergy was widely accused of being hired by de Guerchy to make an attempt on the Chevalier D’Eon’s life. He wrote several sentimental novels in English, including The Lovers and The Scotchman both noted in the preliminaries of the first volume here. Dedicated to Lady Harriet Stanhope, the novel was reprinted in Dublin in the same year and again in London on 1785 as part of The Novelist’s Magazine. ESTC: British Library, Bodley and Paxton House (Scottish Borders) only, Worldcat adds no more.