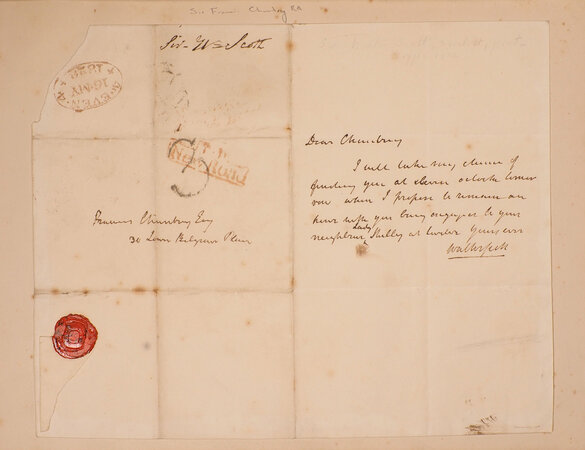 Sir Walter Scott here makes arrangements for a short sitting with sculptor Sir Francis Chantrey before lunching with Lady Shell[e]y. In 1820 Chantrey had produced his celebrated bust of Scott. A further marble version was made in 1828, with additional sittings by Scott, as alluded to in this letter. ‘The original bust in plaster was completed in 1820. It is now in the Ashmolean Museum at Oxford University. According to Chantrey’s ledger, five marble replicas were made, the most famous of which is that at Abbotsford. Begun in 1820, the Abbotsford bust was not completed until 1821, when Scott gave Chantrey a number of further sittings in the course of two visits to London. The Abbotsford bust remained in Chantrey’s studio from 1821 until 1828, and all the engravings and medallions representing Chantrey’s bust would appear to derive from it. Chantrey offered the bust as a gift to Lady Scott while visiting Abbotsford in May 1825... A third marble version was made for Chantrey's own studio in 1828, for which Scott gave further sittings, and which shows minor changes in the configuration of the face. This version was purchased by Sir Robert Peel in 1838 and is now in a private collection’ (Oxford DNB).

Frances Lady Shelley was one of the principal English diarists of the George III period and a close (if not always sympathetic) acquaintance of the Scotts.