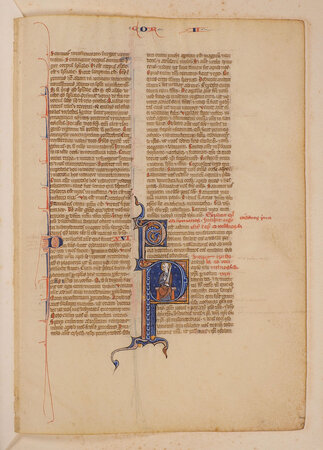 One leaf, vellum (212 × 150 mm), Latin text on 49 lines in double columns (one both sides), in a small and neat hand, one eight-line illuminated initial ‘P’ depicting saint Paul with a sword, on a rich blue ground and a pink background, one five-line initial ‘P’ with a beast’s/dog’s head, some rubrics, page headings in red and blue. Minute early annotation/glossing. Bound in leather backed oak boards between multiple leaves of paper.

A fine fragment from a typical median sized French thirteenth century Bible, with characteristic illumination in a good state of preservation. The text is from Saint Paul’s Epistles 1 Corinthians 15:44 to 2 Corinthians 3:4. Though in a typical Parisian style, the Bible’s origin may actually have been Avignon — it is mentioned in N. R. Ker, Medieval Manuscripts in British Libraries, I, 1969, p, xii, n.2, for its punctus flexus punctuation, distinctive of the Carthusians, and it belonged to the Carthusians of Villeneuve-lès-Avignon. The Bible broken up by the dealer Louis Bondy, c.1961.