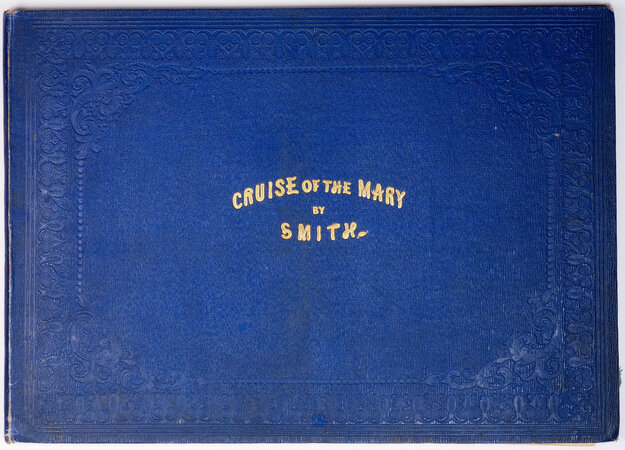 First edition of a rare lithographed work, pseudonymously issued, but the artist/author James O’Hara is identified in this copy with a contemporary manuscript key. The album is in the form of a graphic narrative recording a yachting cruise from Ireland to Iceland by a group of friends aboard Captain Henry’s Maroquita (a fine two-masted schooner wrecked in Holyhead harbour in 1860). While the initial scenes depict the voyage out (with predictible sea-sickness) most of the images are Icelandic vignettes, with local characters and landmarks. One shows a member of the party photographing geysers with a tripod camera — surely an early record of photography in Iceland.

The manuscript key identifies the four sailors, ‘Smith, Jones, Robinson and Brown’ as James O’Hara, Captain Sandes, Mr. Lane Fox and Captain Henry, ‘proprietor of the yacht Maroquita’ respectively. The National Library of Ireland copy bears the imprint ‘Wm. Robertson’. WorldCat locates only the copy in the Universitäts- und Stadtbibliothek, Cologne, which has the imprint of Robertson of Sackville Street, Dublin at the foot of the title-page (where ours is blank). There is also a copy in the National Library Ireland (also with Robertson imprint). No copy found in the National Library of Iceland Catalogue.