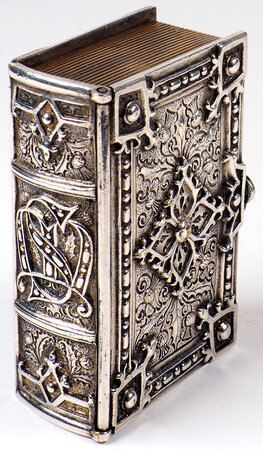 (65 × 50 × 25 mm) silvered box of cast metal in the form of a book with cornerpieces and clasps, thistle motifs to covers and spine, ‘M.S.’ monogram to spine, gilt ‘page’ edges, green velvet lining.

A charming book-form trinket box, of unknown manufacture, but with other examples known to have been marketed in London in the late nineteenth-century. The monogram reads ‘M.S.’ (though admittedly it could also be ‘S.M.’) and it has been plausibly suggested that the reference is to Mary Queen of Scots, given the all-over thistle pattern. Mary was executed in 1587 and so it is just possible that these boxes were in some way marketed at the time of the three-hundredth anniversary, though we can do no more than offer this as a suggestion.