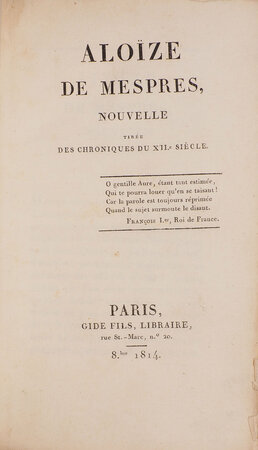 FIRST EDITION, a rare historical novel by an extraordinary woman, conventionally remembered as a mistress of Napoleon. Born Pauline Bellisle in 1778, the daughter of a clockmaker, and later apprenticed as a milliner, she married French cavalry officer Jean-Noëlle Fourès. When he was posted to Egypt, Pauline travelled with him, evading detection during the voyage dressed in men’s clothing. Napoleon was captivated by her, apparently considering divorcing Joséphine in consequence, and sent her husband away on a spurious mission back to France, then invited Pauline to share his quarters in Egypt. She thereafter took the role of an unofficial consort and divorced her husband, only to be left behind in Egypt when Napoleon returned to France. She narrowly escaped death during the Cairo revolt of 1798 before returning to France herself the following year. Granted a house and pension by Napoleon she remarried, only to divorce once more after a renewed liaison with Napoleon (now emperor). She went into exile in Brazil with a third husband after Napoleon’s fall, returning to France in 1837 and finding success as a painter and musician and gathering an important art collection. She was the author of two novels, Wentworth (1813) and Aloïze (1814), both now very rare. WorldCat locates copies outside France at BL and Yale only. In France, there are copies at Strasbourg and the Bibliothèque nationale.