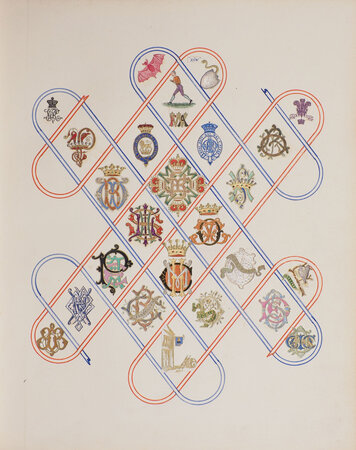 A well-presented Victorian monogram album containing over 1600 cut monograms. Many here are private monograms and include a large number of women’s christian names, while there are pages devoted to regiments, naval ships, clubs, associations and Oxford and Cambridge colleges. The presentation is typical, but especially neat and varied, with the cut monograms arranged on decorative pen and watercolour grounds. These are often geometric (circles and other interlocking figures are frequent) but include a gothic window, patriotic flags, mossy borders, anchors and a heraldic garter. Monogram collecting was hugely popular in the mid-nineteenth century and collections like this usually included genuine examples cut from stationery, together with others specially produced by stationery companies capitalising on the fashion. These latter monograms, evidently sold in sets can be quite elaborate, often featuring gold inks and sometimes with amusing and whimsical subjects.