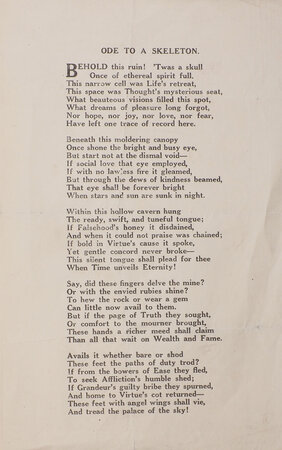 A popular commonplace book verse in the nineteenth century, it was included in The World’s Best Poetry in 1904 with the caption ‘The MS. of this poem, which appeared in 1820, was said to have been found in the Museum of the Royal College of Surgeons, in London, near a perfect human skeleton. It was published in the Morning Chronicle. The author was never discovered, although a reward of fifty guineas was offered.’

‘BEHOLD this ruin! ’Twas a skull
Once of ethereal spirit full.
This narrow cell was Life’s retreat;
This space was Thought’s mysterious seat.
What beauteous visions filled this spot!
What dreams of pleasure long forgot!
Nor hope, nor joy, nor love, nor fear
Has left one trace of record here...’