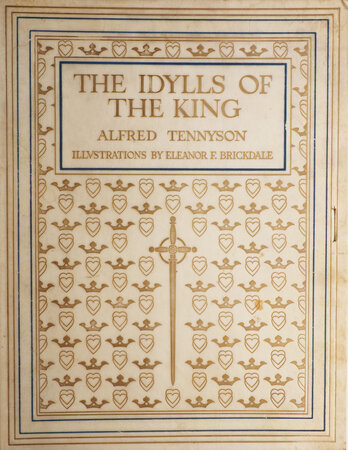 Number 184 of 350 copies, signed by the artist. ‘Eleanor Fortescue-Brickdale never married, and from 1903 to 1943 she lived with her sister, Kate, who was also unmarried, at 23 Elsham Road, Shepherd's Bush. She travelled often to the continent and was clearly influenced by the fifteenth- and early sixteenth-century art which she saw on visits to Italy. There were further exhibitions of her works at Leighton House in 1904, with a catalogue containing appreciative remarks by George Frederic Watts, and at Dowdeswell’s in 1905 and 1909. She continued her illustrative work, which from about 1905 consisted of both line drawings and watercolours made for reproduction as half-tone colour plates. In 1911 two editions of Tennyson’s Idylls of the King (de luxe and popular) were published with illustrations from her watercolours while the originals were on show in another of her one-woman exhibitions, this time at the Leicester Galleries. From that year she taught in the art school in Kensington founded by Byam Shaw’ (Oxford DNB).