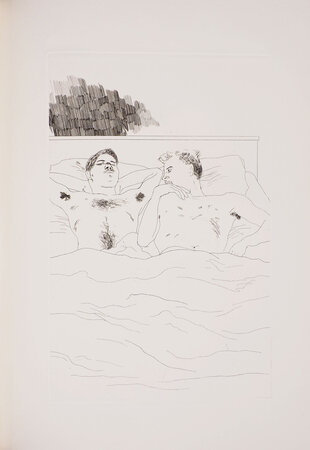 Folio (470 × 320 mm), pp. [42] plus 12 aquatint plates with etching. Without the additional plate of Cavafy issued loose with this edition. The colophon signed in pencil by the typographer (Gordon House) and by David Hockney with the initials ‘A.P’ (Artist’s proof). Original purple cloth. Later slipcase. Original publisher’s prospectus and order form (blank) loosely inserted at rear.

First edition. An unnumbered artist’s proof copy from Edition A (which consisted of 250 numbered copies, plus 50 artist’s proof copies). The total edition was of 550 bound copies and 120 loose sets of the plates only. Edition A was issued with an additional loose signed print ‘Cavafy II’, sometimes framed by owners and not present in this copy. The very rare publisher’s prospectus and an uncompleted order form are inserted at the rear. The plates are not edition stamped on the rear.
‘Cavafy wrote two kinds of poem — love and historical. The fourteen selected for this book are, with the exception of Caesarian, poems of homosexual love: short, unrhymed, deeply felt but totally unsentimental. They appear in a new, hitherto unpublished translation by Nikos Stangos and Stephen Spender... For several years Hockney has admired the work of Cavafy’ (from the Prospectus). The book was included by Neil McGregor in the BBC/British Museum’s History of the World in 100 Objects as an emblem of the struggle for human rights and sexual freedom ― homosexual acts in private were decriminalised in Britain only in 1967, the year Hockney’s startling collection appeared (McGregor, pp. 635-9).