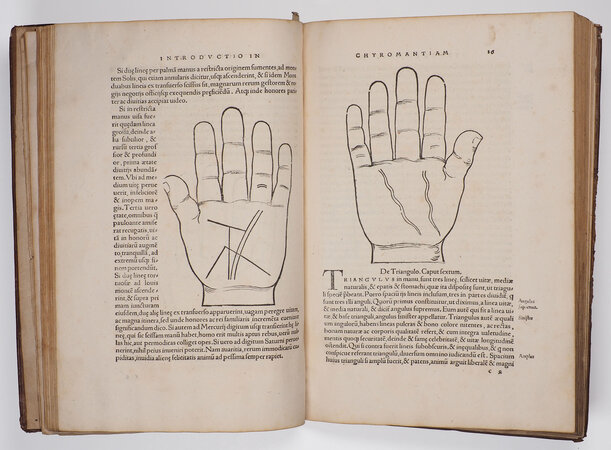 Folio (298 × 200 mm), ff. [2], 30, [41] (misnumbered [1]-38, 47-48, [1]), [1] (blank), the two unnumbered preliminary leaves bearing the dedication bound between leaves 3 & 4, complete. Woodcut portrait of the author to title and his arms to the final leaf, both by Hans Baldung, 37 large woodcut of hands/palms (one being just three fingers), 26 astrological emblems, 11 pairs of physiognomic heads (one pair by Baldung) and 26 diagrammatic horoscopes. 2 large woodcut initials: 9-line G and 8-line S, the latter designed by Hans Weiditz. Old waterstain affecting the lower quarter of pages throughout, light at the opening becoming heavier towards the end. Contemporary calf, spine with six raised bands, gilt supralibros to both covers with the unidentified monogram ‘WW’ (or possibly ‘WM’ or ‘MW’). The binding quite worn with portions of the spine lacking at head and foot (the latter being a whole panel, exposing one band and the sewing structure). Early inscription to title ‘Me dono dedit Rainaldo Marquesius a Canilhiaco’. An interesting, unsophisticated copy.

First edition of this copiously illustrated treatise on chiromancy, physiognomy and astrology, which includes three fine woodcuts by Hans Baldung, former apprentice to Albrecht Dürer. They are: the large title portrait of the author, the final full-page decorative arms and one physiognomical diagram of a man and a woman (p. 5 in the second part) — all three show clear echoes of Dürer’s style. The book was printed for the author, who was an adviser to Cardinal Albert of Brandenburg, Archbishop of Mainz and Magdeburg, the dedicatee (it was to Cardinal Albert that Martin Luther had addressed his 95 Theses in 1517).
Indagine (1467-1537) was a Carthusian prior and humanist theologian who saw no conflict between orthodox faith and the occult sciences. The book was widely read across Europe and frequently reprinted, with a small format octavo edition from Frankfurt in the same year, a vernacular German edition appearing the following year, and an English translation in 1558 (with at least 12 more editions in English before 1700). It was placed on the Index Librorum Prohibitorum in 1559.
Though we have been unable to identify the early owner of this copy, whose monogram appears on each cover, the early inscription is from Rainold, Marquis of Canhilac (Languedoc). Adams I 88; VD16 R 3108; Mende, Hans Baldung Grien, 458-460. Worldcat: Cambridge, Leeds, Folger (portrait mostly lacking), Duke, Princeton (2 copies, one lacking a leaf), Philadelphia College of Physicians, UCLA outside continental Europe.