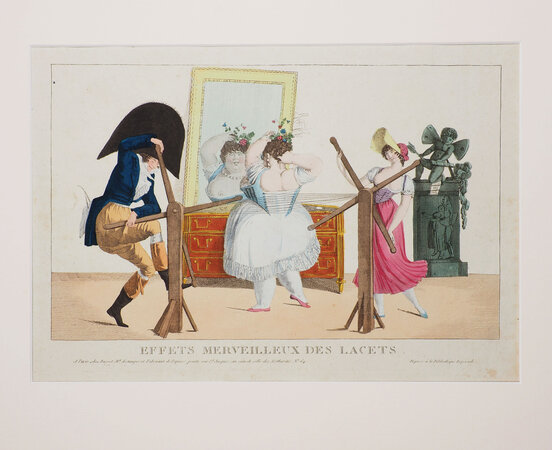 A French satire on the excesses of contemporary fashion for both women and men — a woman has her corset laces mechanically tightened by a fop in a ridiculously exaggerated version of Napoleon’s headgear and a young woman in a scooped bonnet and corset (which leaves her breast almost entirely bare). The corset enjoyed a brief resurgence in popularity in the Empire era, before being swept away once more at the Restoration. It was a frequent subject of mirth in the popular press on both sides of the English Channel, and while there are several French and English prints on the same theme, this one is very rare. Not in the British Museum catalogue; WorldCat lists a copy in the Spanish national library, and there is also a copy at the Musée Carnavalet in Paris.