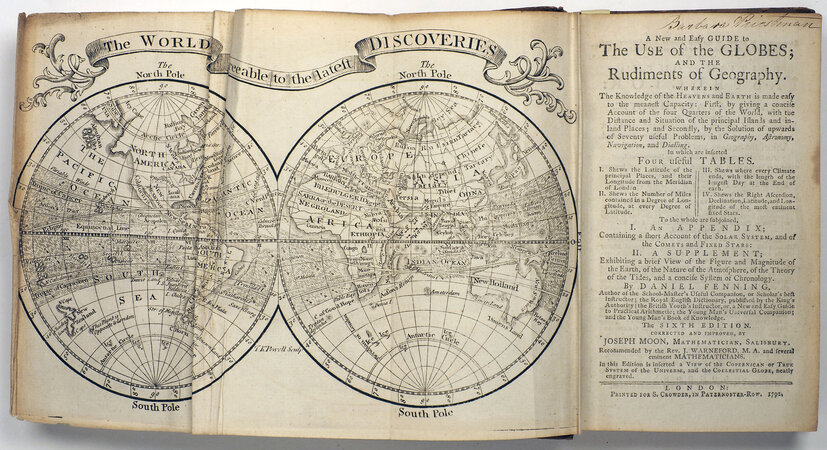 FENNING, Daniel. ~ A new and easy Guide to the use of the Globes; and the Rudiments of Geography. Wherein the Knowledge of the Heavens and Earth is made easy to the meanest Capacity: First, by giving a concise Account of the four Quarters of the World, with the Distance and Situation of the principal Islands and inland Places; and Secondly, by the Solution of upwards of Seventy useful Problems, in Geography, Astronomy, Navigation, and Dialling... the sixth edition... London: for S. Crowder, 1792.

Fenning’s popular Guide to the Use of the Globes first appeared in 1760 and ran to numerous editions. It was regularly used in schools, notably that of Joseph Moon of Salisbury, who made improvements and additions to later editions, including our sixth edition. The identity of this copy’s early owner is not certain, but Barbara Priestman is a sufficiently uncommon name to make a tentative connection with a Quaker of that name who died at Pontefract (Yorks) in 1837 and was born around 1781. The same Barbara may have been among several members of the Priestman family to subscribe to the British and Foreign Bible Society in 1812 via the York Auxiliary Society.