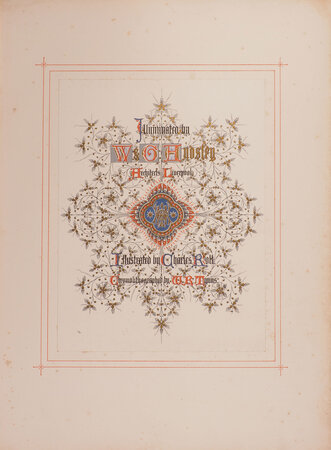 Folio (348 × 250 mm), 27 leaves of thick card, including mounted frontispiece, all printed in chromolithography with gold and silver inks. Some foxing, mainly marginal, occasional marginal fraying resulting in one marginal tear (rather crudely repaired on verso, but no loss), some leaves have begun to detach from the linen guards at the foot, with some creasing and fraying at the gutters, but the illuminated plates themselves unaffected. Original cloth, elaborately gilt. Rather soiled and with some fraying at edges. Later inscription to front free endpaper. A sound copy.

First edition. ‘Illuminated by W. & G. Audsley, architects, Liverpool... Illustrated by Charles Rolt. Chromolithographed by W.R. Tymms.’ William and George Audsley were to become highly influential in the Victorian gothic revival, designing significant buildings both in Britain and the United States. They created a number of lavishly illustrated books on ornament and Japanese art, notably The Keramic Art of Japan of 1875. ‘The size of this book alone is enough to make it one of the outstanding monuments to the Victorian passion for illumination’ (McLean). McLean, Victorian Book Design and Colour Printing (2nd ed.), p. 133.