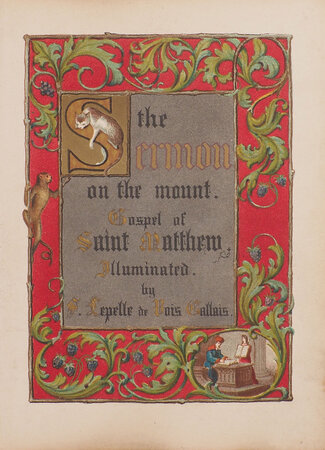 Sole edition of this charming gift book printed in chromolithography with metallic inks and colours in which the text of the Gospel is augmented with the Lord’s Prayer and others. Each of the borders includes additional miniatures and is decorated with naturalistic floral motifs with poppies, irises, teasels and other plants as well as several animals (incuding a cat and a monkey). Almost nothing is known of the illuminator, though a couple of examples of unpublished illuminations by him are noted by Isabelle Saint-Martin in her article, ‘Rêve médiéval et invention contemporaine; variations sur l’enluminure en France au XIXe siècle’, in The Revival of Medieval Illumination, ed. Thomas Coomans & Jan de Maeyer (Leuven, 2007), p. 117. Not in McLean. Rare: Worldcat lists copies at BL, Cambridge, Royal Danish Library and Vancouver Public Library only.