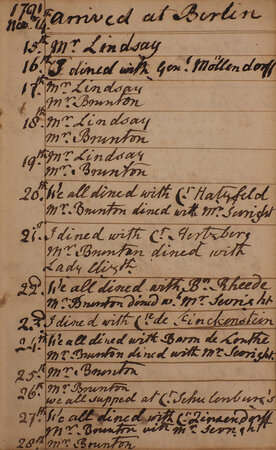 A record of dinners given and attended by a prominent British diplomat and his wife in Berlin and Vienna in the years of the French Revolutionary Wars. Completed on an almost daily basis, the ‘Dinner Book’ lists the names of all the attendees, including many of the key figures in Prussian and Austrian diplomacy, as well as representatives of Great Britain, Russia, Italy, Spain, Portugal and the United States. Emigré French nobles also completed many of the tables. The dinners range from state balls and dinners to ‘great’ and ‘little’ suppers given by Eden himself. In Berlin, the Edens were frequent guests at the court of Prussian King Frederick William II and his Queen, while at Vienna the Prince of Stahremberg was a frequent host. British dining companions included Sir Watkin Williams Wynne, the Duke of Buccleuch, Lord Henry Spencer, Sir Robert Cotton and Lord Dalkeith. French guests included the emigré duc de Richelieu, Louis de la Trémouille, Armand de Polignac and on 11 November 1797 in Vienna Eden notes: ‘Dinner was given to the Duke d’Enghien, who stayed here 3 days on his way to Russia...’ As a member of the House of Bourbon Enghien commanded a corps of emigrés established by the Prince de Condé and he was later executed by Napoleon for collaboration with the British. Also among Eden’s acquaintances in Vienna was American statesman Gouverneur Morris, who was in Vienna in the autumn of 1796 as American Minister Plenipotentary to France. He is noted in Eden’s book as ‘Mr Morris — American’ and dined with him at least six times.
The dinners form the diplomatic and social background to the negotiations concerning the balance of power in Europe during the French Revolutionary Wars — on 4 May 1795, for example, Eden had signed a treaty with Austrian chancellor, guaranteeing a loan of £4,600,000 to Austria for fielding 170,000 troops in Germany against France.
Educated at Eton and Christchurch, Oxford, Eden was appointed ‘envoy-extraordinary and minister-plenipotentiary at the court of Berlin. He was nominated a knight of the Bath on 16 December 1791 and, at the special request of George III, was publicly invested with the insignia of the order by the king of Prussia on 1 January 1792. In February he very readily proceeded to Vienna as ambassador to the emperor of Austria for a year, and on 12 November 1794 he was sworn in a privy councillor, and, after reluctantly agreeing to be dispatched to Madrid as ambassador-extraordinary, he was reappointed envoy-extraordinary to Vienna to negotiate the war loan to the emperor. He remained in the Austrian capital for five years’ (Oxford DNB).