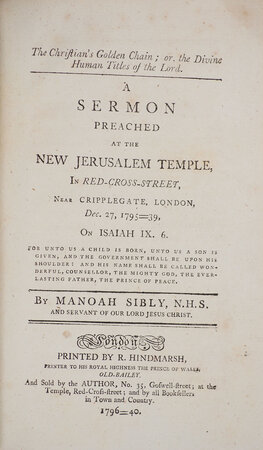 First editions of two very rare Swedenborgian sermons preached in the New Jerusalem Temple in Cripplegate. Separately issued, they were the first two in a series of 12 published in the same year listed on the advert leaf with details of subscription. On completion, all twelve could also be bought bound up with a general title as Twelve Sermons (also 1796). They are rare both alone and collectively — ESTC lists copies of these first 2 sermons at BL only and copies of the collected Twelve Sermons at: BL, Glasgow, Rylands, Academy of the New Church and Louisiana State University. The printer, Robert Hindmarsh was one of the founders of the Swedenborgian movement and the Church of the New Jerusalem in England. The publication dates of both titles is given as 1796=40, reflecting the Swedenborgian belief that the Last Judgement had occurred in 1757, with 1796 representing the 40th year of the Second Coming of Jesus Christ through divine revelation.

‘Sibly... (1757–1840), Swedenborgian minister and banker, was born at Bristol on 20 August 1757. He was the brother of Ebenezer Sibly (1751–c. 1799), a notable publisher of esoteric lore, and was himself an autodidact and nonconformist, self-taught in the classical and biblical languages, part of the self-taught artisan culture. He specialized in alchemy and astrology, and became for a period a bookseller in Goswell Street, London, specializing in books on the occult, some of which his brother was then publishing. He himself translated two astrological works by Palcidus de Titis... He also served as a shorthand writer... (ODNB).

They are here bound together with three other East London non-conformist sermons:

Joseph Priestley, The present State of Europe compared with antient Prophecies; a Sermon, preached at the Gravel Pit Meeting in Hackney, February 28, 1794, being the day appointed for a general fast. By Joseph Priestley, LL.D. F. R. S. &c. with a preface, containing the reasons for the author’s leaving England. London: for J. Johnson, pp. xx, 44, [8] (advert/catalogue for Priestley’s books). First edition.

William Cooper. The Promised Seed. A Sermon, preached to God’s ancient Israel the Jews, at Sion-Chapel, Whitechapel, on Sunday afternoon, August 28, 1796. By William Cooper.... London: Printed for the author; and sold by T. Chapman and J. Matthews, [1796], pp. 38. One of several editions of 1796 and probably the first.

William Cooper. Daniel’s Seventy Weeks. A Sermon, preached at Sion-Chapel, on Sunday Afternoon, September 18, 1796, to the Jews. By William Cooper. Being his second Address to that People. London: Printed and sold by T. Chapman, 1796, pp. 32. One of several editions of 1796 and probably the first.