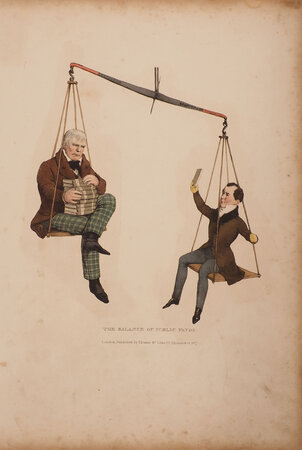 An excellent contemporary satire on the literary celebrity of Sir Walter Scott ‘ depicting Sir Walter Scott and Thomas Moore, two friends but also literary rivals, sitting on opposite ends of a giant set of scales. The scales are not balanced: Scott is seated on the higher scale, looking gloomy, clutching the nine volumes of his biography of Napoleon, while Moore is on the lower scale, looking pleased, and confidently holding up a single small volume for Scott to look at. The print refers to the fact that Scott's “The life of Napoleon Buonaparte” was due to be published on the same day in 1827 as Thomas Moore’s prose romance “The Epicurean, a Tale”, based on his unfinished poem “Alciphron”; however, Moore managed to get his book published a day earlier. Scott’s biography was subsequently a commercial success but met with a very mixed critical reception, whereas Moore’s first novel was an immediate commercial and critical success, hence “the balance of public favour” falling in Moore’s favour’. BM Satires 15440.