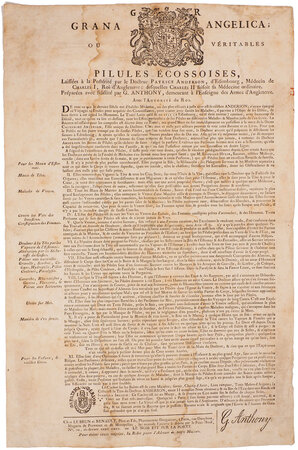 A RARE FRENCH BROADSIDE ADVERTISING THE VIRTUES OF ‘SCOTCH PILLS’ OR ‘GRANA ANGELICA’ invented by the seventeenth-century Edinburgh physician Patrick Anderson, a medical treatment which remained popular in Scotland, England and France well into the nineteenth century. The long text in twelve chapters outlines the supposed virtues of the pills as a cure for almost any complaint. This French version imitates the English broadsides of the second half of the eighteenth century (there are several in ESTC) which themselves mimicked the form of Royal proclamations with woodcut arms at the head. It also reproduces the purported trademark of Anderson and his successor Isabelle Inglish, which seems to have been pirated as often as the pills themselves.

‘Some time after 1625 Anderson was appointed physician to Charles I. In 1635 he published in Edinburgh Grana angelica, a treatise in Latin which puffed his mild aperient pills, made with aloes, colocynth, and gamboge, and pronounced a sovereign remedy for cleansing the system after carouses. Anderson claimed to have brought the formula of the pill back from a trip to Venice about 1603’. (Oxford DNB).